ABBA gets a bad rap for no real reason. After all, up until the success of the musical “Mamma Mia!”, bringing up ABBA in a serious conversation about music was (and still is) seen as a major faux-pas, especially for anyone younger than the age of fifty. Sure, a lot of their songs could be considered to be cheesy, but, out of all the bands who garner any sort of hatred or disdain from the public, ABBA are probably the ones who deserve it the least. While their sound is definitely of a certain era (one could only place most of the group’s biggest hits at the height of disco), the foursome’s work should be included in the short list of great contributions made to modern day pop music. 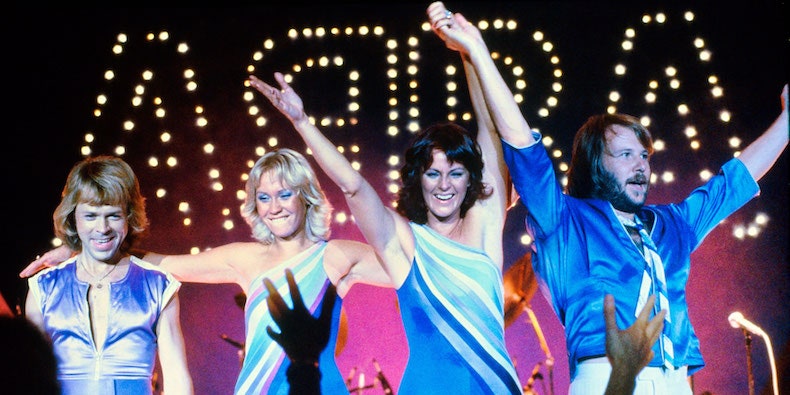 Case in point: ABBA: Gold, released almost a full decade after the band had broken up, stands the test of time as not only a time capsule into an important era in popular music, but also as an outstanding greatest hits collection of a band that often gets the short end of the stick from the music world and the public in general. From the onset, the talent and chemistry that these four Swedes had becomes undeniable to the listener; after all, the songwriters and musical geniuses of the group (Benny Andersson and Bjorn Ulvaeus) were in long-lasting relationships with the two female lead singers (Anni-Frid Lyngstad and Agnetha Faltskog) respectively. With the famous piano slide of “Dancing Queen” opening the album, ABBA: Gold kicks into full gear, proceeding to string together hit after hit, one after another. All of the classics are present on this collection: “Take A Chance on Me” and “Voulez-Vous” bounce along smoothly under weaving and contrasting vocal melodies, and “Gimme! Gimme! Gimme! (A Man After Midnight)” and “Money, Money, Money” nicely complement the more upbeat and positive tracks, serving as a telling precursor to the group’s shift in overall tone only a few years later. Meanwhile, the uplifting tone of “I Have A Dream,” the haunting “One of Us,” the prevalent, bouncing bass line of “Chiquitita,” and the lighter-than-air “Fernando” all demonstrate the group’s ability to create beautiful ballads, regardless of the message underneath all the glossy production. But, what makes Gold truly worth its weight in the realm of pop music is in the songs that utilize a (slightly) harder-hitting pop-rock/glam-rock structure, revealing the great depth of pop-styles that these four continuously churned out during their time together. Make no mistake: tracks like “S.O.S,” “Knowing Me, Knowing You” and “Does Your Mother Know” are all still pop tunes at heart, but they’re easily some of the group’s best and catchiest songs because of their great pacing, perfect lyrical phrasing, and outstanding instrumentation (the piano playing by Andersson is especially noteworthy), along with their dazzling musical composition and arrangements.

The overall consistency of all nineteen songs on this collection makes one ask the question: is this the best greatest hits package ever assembled? The argument can be made, given that many artists decide to release hits compilations at the height of their career, or far after all their relevance has faded away, that ABBA: Gold is certainly one of the best greatest hits compilations ever put together because of the perspective it gained from being released years after the band had broken up. This added perspective made the work of those who arranged the tracking of this collection fairly simple, allowing them to leave out any tracks that could even considered to be filler. Because of this attention to tracking, the collection flows smoothly and naturally from one track to the next, even though the songs on here were released over the span of nearly a decade. Simply put, all the songs on this album were worldwide pop hits when they were first released, and nearly every track has stood the test of time decades later. There’s no messing around here – ABBA: Gold gives the listener exactly what they want: outstanding pop songs, catchy melodies and lyrics, and above all else, the ability to make you dance, even if everyone else tells you that you shouldn’t.

Listen to ABBA Gold on Spotify below: