A few months ago, I posted a series of blog posts revolving around digging further into my Last.FM scrobbling history. While I continue to collect data in preparation for an update to that work as it pertains to my overall listening trends, I wanted to take some time to show you some visualizations that I’ve thrown together in recent days revolving around my most played artists.

I often find myself curious about my listening patterns as it relates to artists and albums. I find myself getting really into an artist for a short period of time, before moving away to listen to something else (for the purpose of this post, I’ll call these short periods of obsessive listening: “kicks.”) These kicks happen most often with my two most played artists, Green Day and the Beatles. Both are bands who have long, thorough discographies which I’ve fallen in love with over the past decade-plus.

With the help of the Last.FM export tool on the Mainstream Calculator by Last.FM user ghan64 and Tableau, I was more accurately able to track these kicks for my two favorite artists.

The chart above shows data for January 2017 – April 2018, with blue referring to Green Day and orange referring to the Beatles. The lines at the top of the chart represent a running sum of the number of plays over time, where the bars at the bottom represent the number of listens per week, broken out by these two artists.

The results are really interesting – my Beatles kicks are much larger than the Green Day ones in terms of sheer plays within a small period of time (two such Beatles kicks included a week period with over 100 plays), while my Green Day kicks are slightly more spread out and consistent, with no one-week period having more than 75 plays, but there are more weeks overall with significant Green Day plays. Due to the longevity and consistency of my Green Day plays, they recently overtook the Beatles as my number one played band during this time frame.

What’s also interesting about this is the fact that there are clear cutoff points on these kicks. For instance, during the first half of 2017 where I went from a Green Day kick to a heavy Beatles kick seamlessly, before completely abandoning both artists during the summer and most of the fall. This same pattern seemed to occur again in early 2018, with the months of January through April being filled with plays from both artists. We’ll see if the same pattern holds up this summer.

Here’s my listening breakdown of Green Day by album during that same period:

On the chart above, each dot represents a week where there was at least one play on a specific album. Its not shocking to me to see Dookie clearly at the top of this chart, especially because I recently wrote about it for my On Wax series. What is a little surprising is that American Idiot falls so low here (5th overall), because it was one of my favorite albums for so many years, while Nimrod has come on strong as my second most played album. You can also still see the gap last summer where I barely listened to any Green Day, before ramping back up again at the start of this year.

Unfortunately, the Beatles chart doesn’t come out as nicely:

The fact that Sgt. Pepper is so high is (again) probably the result of writing about the album at length for its 50th anniversary last summer, and Anthology placing so high is due to me listening through the 2nd and 3rd collection all the way through in a short period. The rest of the albums are actually bunched together fairly tightly, with White Album and Abbey Road beating out my personal favorites, Revolver and Magical Mystery Tour probably due to the fact that The Beatles has more tracks to listen to, and I usually listen to Abbey Road in its entirety as well. 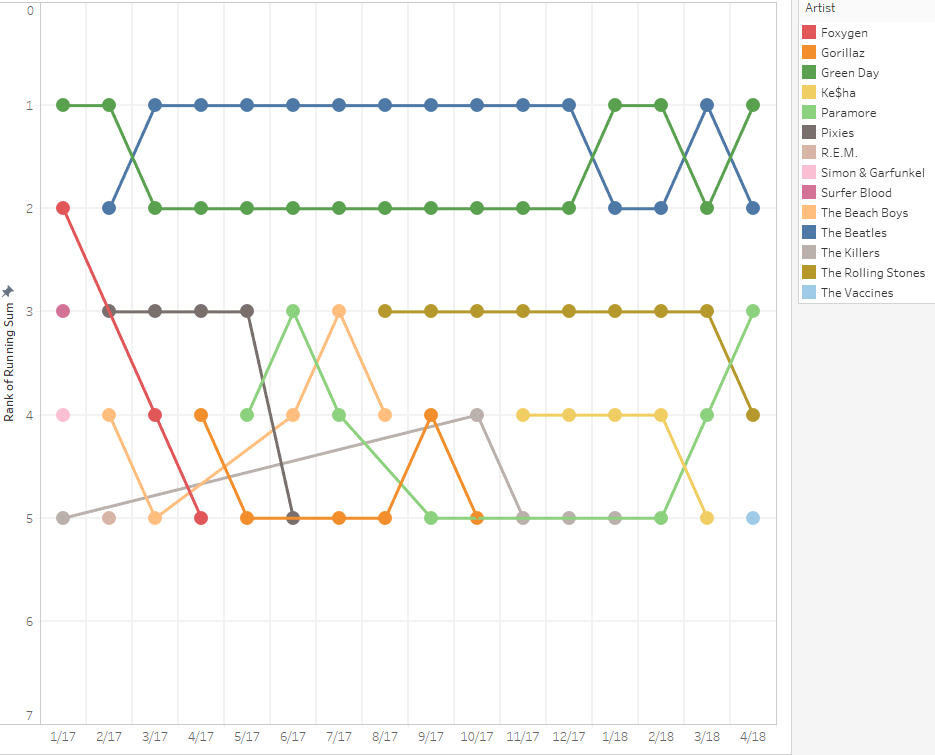 Here’s a bubble chart of the top five played artists by running sum of plays over that same period of time. You can still see Green Day and the Beatles at the top, but the other positions are much more random, mainly based off of how heavy a kick I went into for that particular artist (check out the Rolling Stones [gold line] jumping up to third out of nowhere in July, or Paramore’s [light green line] drop and subsequent rise).

And just for kicks, here’s the entirety of my Last.FM scrobbling history as a running sum of plays. 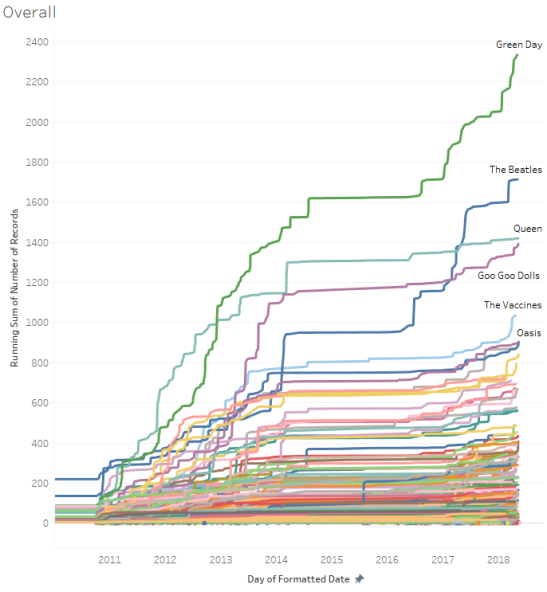 The period from 2014-16 is unfortunately mostly flat due to the fact that I was jumping around to different streaming services and didn’t connect it up with Last.FM. But it’s interesting to see how into Queen I was in college (2012, 13 especially), and the rise of the Goo Goo Dolls, the Vaccines and Oasis post college.

Thanks for reading! Comments and suggestions are always appreciated!