I took yesterday off as sort of a respite – a day just for me to take some time to take a step back and purposefully do absolutely nothing. I’ve been talking to a lot of people about how I feel like I’m wasting my time when I’m sitting around at home not doing anything. It’s a form of anxiety that I’ve had for a while now, since I’m usually going to work, doing errands, seeing friends, or going on a date with the girlfriend, I’m used to the constant movement, and time alone to myself in the apartment is hard to come by. When I think about that subtle anxiety, and taking the time to step back and look and consider things – it sounds like the perfect opportunity to listen to some Radiohead – specifically two of my favorites, 1997’s Ok Computer and 2007’s In Rainbows.

What more can be said about Ok Computer? Thom Yorke’s disillusion with the constant travel during extensive touring for The Bends, the increasing prevalence of technology, and feeling almost disenchanted with the world around him gave birth to an incredibly disturbing vision. Songs like the multi-part “Paranoid Android,” the robotic “Fitter Happier” and the political “Electioneering” all give the listener an intense sense of dread, almost a feeling that there’s something lurking behind you, or rather, around you. Yet a fair amount of Ok Computer is peaceful (personal favorite: “Let Down”), or even cathartic (“No Surprises,” “Lucky,” “Subterranean Homesick Alien”), and almost always beautiful. These are songs which almost seem to somehow transcend above everything. The kicker to all of these conflicting emotions and overarching themes is that Ok Computer really doesn’t stray too far from the path of conventional song structures and instrumentation. But, nearly every moment on this album feels calculated, intense, and important. It’s one of a very few albums that I can say gives off such strong feelings without coming off as too intense for casual listening. Every time I listen to Ok Computer, all I can really say is “yikes” because it’s undoubtedly one of the best records in terms of sheer tone and atmosphere. 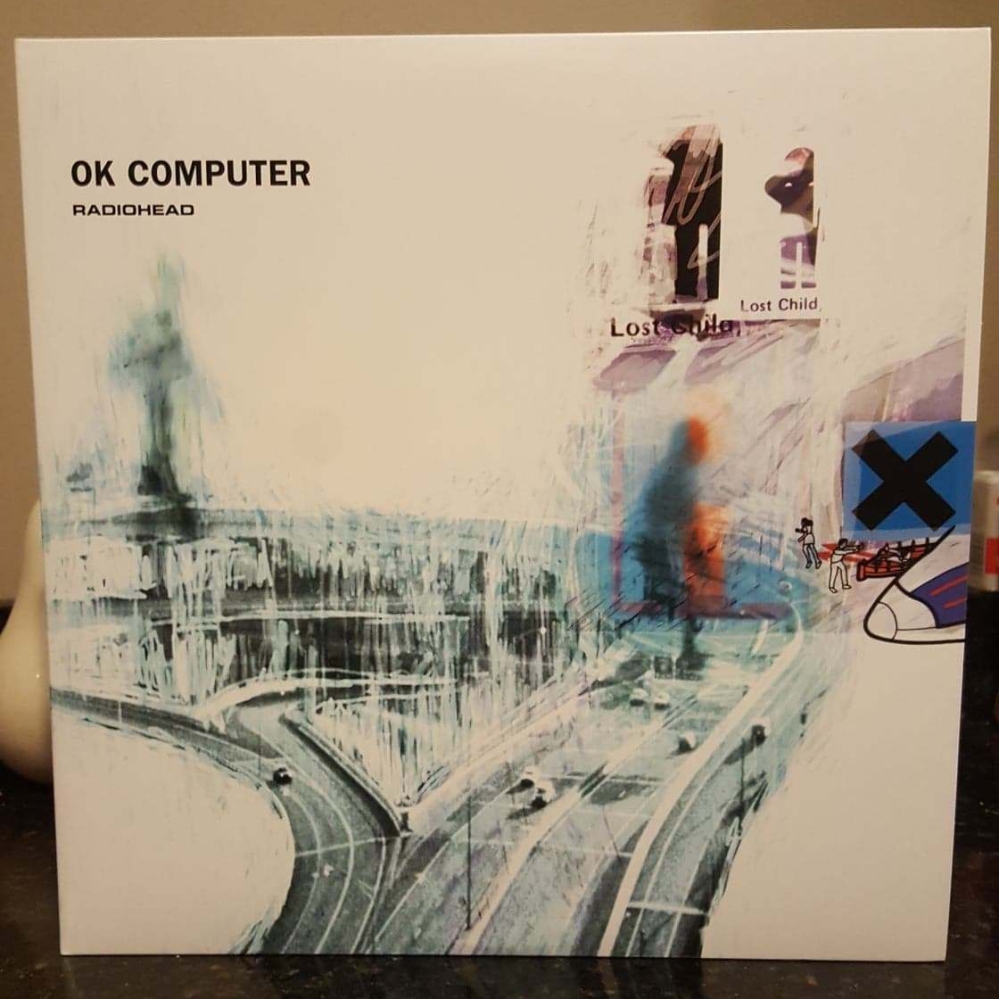 The version of Ok Computer that I have on vinyl is the standard re-release of the album from 2016. The timing of my purchase was actually rather unfortunate given the fact that the OKNOTOK 20th Anniversary re-release of the album came out only about a year later, and perhaps eventually, I’ll splurge to get that edition because it looks pretty sexy. But, my 2 LP edition of the album will do for now. It’s pretty hefty for a standard reissue, with both records being pressed on 180 gram black vinyl in a gatefold sleeve. The best thing about the package itself is its iconic art. Even just looking at the fractured lyrics, the washed out doodles, the drawings and the little quips add so much to the general feeling of the music than your average artwork would. Even the subtleties of showing you which record to play first (the four sides are marked as “eeny/meeny/miny/mo”) give the album a little more of an aura. No extras were included with this package, but when the music is this engulfing, it doesn’t really matter. 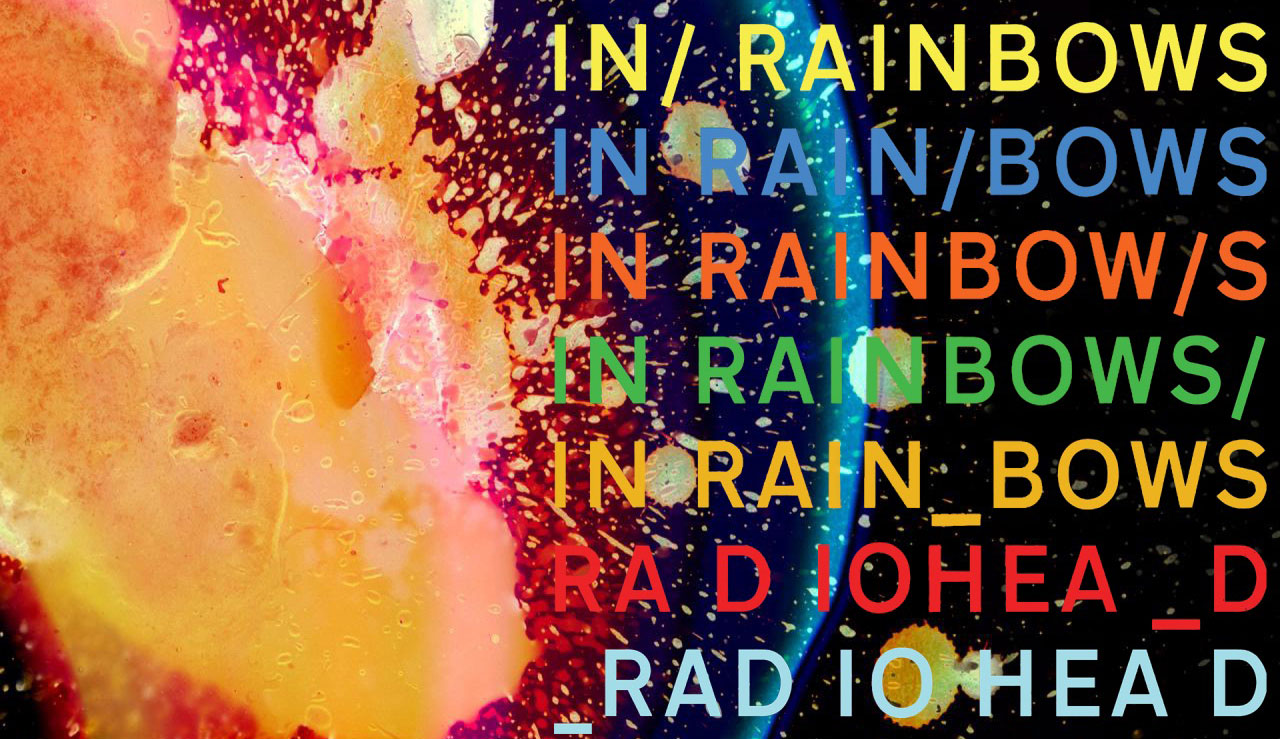 In Rainbows was released ten years after Ok Computer, and by that time, Radiohead had been one of the world’s most popular rock bands for nearly a decade. As a result of the critical and commercial success of Ok Computer, Thom Yorke suffered a mental breakdown and began creating songs that purposefully strayed away from conventional rock themes and more towards electronica and ambient sounds that littered both Kid A and Amnesiac. Following a return to simple recording and more straightforward sounds on Hail to the Thief, Radiohead returned in 2007 with In Rainbows, a true return to form for the band.

In Rainbows was independently released by the band on a “pay what you want” model, that is, you could go to Radiohead’s website, type in whatever monetary amount you felt was fair for the album (including zero) and download your copy of the album. It was a revolutionary idea at the time, because up until then, you either had to buy the physical CD or pay sticker price for it on a digital music store like iTunes. But In Rainbows flipped the switch on all of that, and, quite honestly, it may not have had the effect on the market that it ended up having if the album were it not as good as it turned out to be. In Rainbows put the classic Radiohead formula back in place – accessible (yet not exactly straightforward) sounds combined with ambient atmospheres, but this time, with a new resolved focus on rhythm (“15 Step,” “Videotape”) instead of focusing on melody like Ok Computer does. It remains the warmest and most intimate album that Radiohead has recorded throughout their long career, and despite a number of stand out songs, it’s best played through in full to really get the whole picture. The devastatingly beautiful “House of Cards” stands out as a personal favorite of mine, with the quivering opening line of “I don’t want to be your friend/I just want to be your lover” drawing me in every time. It longs and aches for some resolution, and it feels like Yorke and the rest are the band are right there next to you – talking to you, and only you. 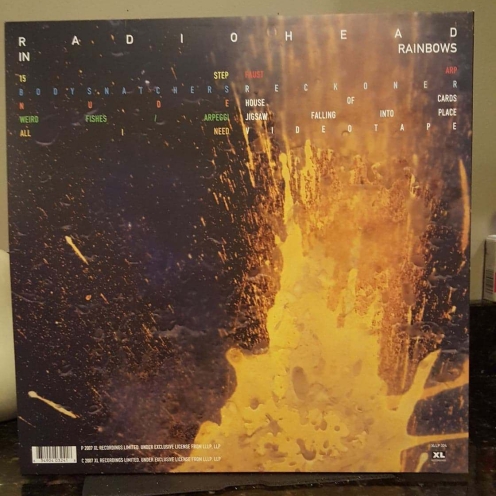 In Rainbows relative warmth and personal nature translate unbelievably well to vinyl, a format known for sounding “warmer” than its digital counterparts. The version I have is simple yet effective, again, the album is pressed on heavy 180g vinyl, and there are no extras outside of a digital download card, but, like Ok Computer, it’s effective artwork stands out as a great representation of the music inside. Unlike OK Computer, however, In Rainbows artwork is all about color. The contrast of the black matte with the exploding molten wax is simple, yet iconic, and instantly recognizable. I’m a little disappointed that there wasn’t a 10th anniversary release of the album on vinyl that included the album’s stellar b-sides, but maybe one day.

Thanks for reading! Comments and feedback are always appreciated. Listen to Ok Computer and In Rainbows on Spotify below, or, if you’re feeling a little adventurous, try out the 0110 playlist which links the two records together with shocking consistency.

3 thoughts on “On Wax: Ok Computer + In Rainbows”