Spotify is constantly making minor tweaks to their platform and their service, but they consistently overlook easy and straightforward improvements that would go a long way in providing users with the best listening experience possible. Here are a few that Spotify might want to consider!

(For a little reference, I’m a Spotify premium user on Android/Windows, but I believe that most of these suggestions are applicable across platforms).

Spotify has a treasure trove of really interesting data at their disposal, so my natural question as a music lover and a data nerd is: why aren’t they displaying more of this data to their premium users? Every year, they release a limited amount of data in the form of their personalized “Wrapped” series (see right) and everyone loses their minds comparing and sharing their stats, but that’s really only a small preview of all the data they actually have on you and your listening habits. Sure, things like “top songs” and the amount of minutes you’ve listened to are interesting, but how about more characteristics of the music you listen to? (they purchased the Echo Nest for exactly this reason, after all).

On that same note, being able to see farther back into your listening history without having to rely on 3rd party tools like Last.FM would be a huge improvement on what Spotify currently gives you access to. Even a dashboard where you could break your listening data down by day, week, month, with a few interactive visualizations wouldn’t be too hard to make with the resources that Spotify has (btw, @Spotify, if you need someone for this, you know where to find me).

The Ability to Customize Colors and Fonts:

Back in the day when there were only a few music players and no real ubiquitous solution, players like Winamp offered users the ability to fully customize their player by changing skins, themes, and colors. Perhaps Spotify should have a similar feature? Obviously black goes with everything and there’s something to be said about the power of branding. But, having the ability to change the background color, text color, size of the font, etc would be a nice addition to have to really give the player (on both desktop and mobile) a more personalized flavor. On that note, a visualizer in the vein of old school iTunes could be under the “nice to have if done right” category. 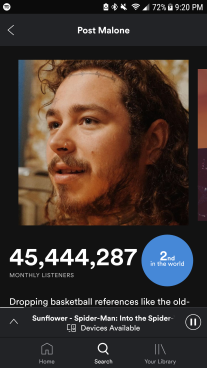 I’m a sucker for charts and chart movement – hell, that’s where the name of this blog came from in the first place. Spotify does provide some global charts that tell you the top songs worldwide and in different parts of the world. That’s all well and good, but, how about the same sort of thing for artists and albums?

A cool part of the bio section of Spotify (see right) is seeing that an artist is number (blank) in the world, and those rankings change on a regular basis. But, it’s difficult to get the whole picture without straight up guessing artists. I can imagine a functionality where clicking on that blue circle could bring you to that list of rankings seamlessly (it currently is static).

Get rid of those “artist uploaded videos” that play over audio:

Spotify has been pushing to be more than your source for audio needs, pushing into the realm of video has been a tough sell to most Spotify users since YouTube is a more ubiquitous source for that. That’s fine by me, I’d love to see Spotify grow into other fields, but why does video need to infringe on your already pretty great audio player? For example, I click on Post Malone’s new song “Sunflower” on Spotify mobile for Android, and instead of seeing the standard album artwork/player dynamic, I get this weird 3 second loop of video in the background that’s simultaneously uninteresting and distracting.

Spotify claims that this video was uploaded by the artist, which in reality means it was uploaded by the label or marketing team. I think it’s an interesting idea to be able to customize a visual behind a song if the visual was something more than a straight up marketing ploy (like a full music video, or a visualizer of some sort!) But, come on, Spotify, this is a short, uninteresting loop that makes the player look terrible, and once you’ve seen the 3 second loop, there’s nothing more to see. Please get rid of it, or at least give us an option in the settings to not see those sort of things.

The Release Radar is Really Disappointing:

More like the remix radar, amirite? The idea of having a canned playlist that highlights new additions to the Spotify library from artists you’re interested in or have listened to is a good one, but, the Release Radar as it stands right now is more often a waste of time than anything else. On any given week, most of the “Release Radar” playlist is just recently uploaded remixes or edits of songs that have already been released. I don’t listen to remixes that much (and Spotify knows that – maybe other people do), so maybe a retooling of the Radar is needed. There are times that the radar doesn’t even capture releases that I’m interested in if it happens to be a deluxe edition or a remaster (it would seem that it uses the release date for the album to see if it’s “new.” For example, a remaster of a Beatles album doesn’t show up on my radar because the date in the Spotify metadata shows it was released in the sixties (correctly, but there’s an argument both ways), but a 10th remix of “Under Pressure” shows up, so that’s just as good right?

Make it Easier to Suggest Additions/Changes:

The process to tell Spotify about missing tracks, additions that they should make, or wrong metadata is pretty difficult at this point, and while it appeared briefly as an experiment called “Line-In,” that feature isn’t available to users anymore. Spotify meta-data is notoriously hit and miss, and “Line-In” provided a way for users to submit changes. I can only imagine how many “false positives” they got from that experiment – people giving them false information, and then someone at Spotify having to check to make sure the suggestion was actually correct. That’s a lot of man power for something relatively inconsequential, but still, even if you have to hide the functionality in a settings menu, it’d be nice to have an easy way to reach out to Spotify directly from the native app/player.