Here’s what I was listening to as March turned into April, and the days just kept on blurring together. 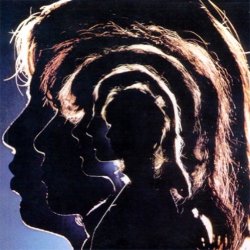 I’ve often said that the Rolling Stones never made a single studio album as good as The Beatles, but, what they lacked in album based consistency they made up for with an overwhelming amount of hits. Of course, there are a number of compilations that do a great job at just giving you the Stones’ hits – my go to for a while now has been Hot Rocks, but it unfortunately ends at the Stinky Fingers era and doesn’t include any of the band’s later work (most notably Some Girls). There’s also High Tide and Green Grass for a heavier focus on their pre-psychedelic era hits, and Forty Licks if you want a little of everything. But, the reality is that no matter how you package it, one album doesn’t give you the whole picture of the Stones’ longevity and the breadth of their work.

Viral Tracks: Get Off of My Cloud, Jumpin’ Jack Flash, Street Fighting Man

There were a bunch of bands in the 90s and 00s who grew up on their parents record collections and made it a point to bring back the “AOR/classic rock” sound to the masses, most notably, Oasis, Jet, and Wolfmother, each bringing their own distinct flair to rock music while lifting from the sounds of the past. An argument is often made that these kind of bands aren’t objectively “as good” because they take so many notes from the legendary bands like The Beatles, Stones and Black Sabbath (respectively). But, I’m not in that boat; give me this stuff all day. Wolfmother stands up as the ultimate triumph of this genre, sounding like it could have come straight out of the heyday of early 70s progressive and classic rock -even the album cover plays into the mystical feeling that bands like Led Zeppelin were so well known for.

Over the past couple months, I’ve had the task of cleaning out and selling my childhood home. It’s been an arduous (and very dusty) process, but going through this has allowed me to come to peace with a house that I, up until recently, felt was cursed. I’ve come to grips with the fact that the house itself wasn’t cursed – but, perhaps it took on that significance to me because of who lived inside of it. I found a number of really weird and interesting things in that house, including the now infamous Slobber on My Knobber VHS tape (no, I will not be Googling that), an avalanche of old pictures that I haven’t seen before, and way too much glass/breakable stuff that I guess people just gifted to each other all the time but never actually used? But mostly, the house was filled with things that just built up over the 40+ years that my parents lived there, and were never really touched. What better way to pass the time filling up contractor bags with old papers than with the songs that I listened to when I lived there? Over the years I’ve put together a playlist called “High School Leftovers” that has a lot of the songs that I associate with middle and high school that didn’t make it onto the playlists I made for my friends at the time. I still find solace in many of these songs; they helped me then, and they sure as hell helped me now.