Did I jump the gun by making plans for the 4th of July? Maybe. Here’s what I was listening to this past week.

Lady Gaga stormed onto the scene in the late 00s, and what followed was a nearly four year period of domination of the pop music landscape not seen in quite some time. Incredibly talented, outrageously flamboyant and outspoken, she could do no wrong during that time, scoring hit after hit after hit…(…after hit after hit, 11 top 10 songs during that period). Gaga wanted to be famous, and she got her wish shortly after the release of her debut album The Fame, (which itself contained four of those hits). The Fame may be best known for it’s singles, and it may be overshadowed by its re-release The Fame Monster, but as a cohesive pop album, it’s certainly no slouch either. 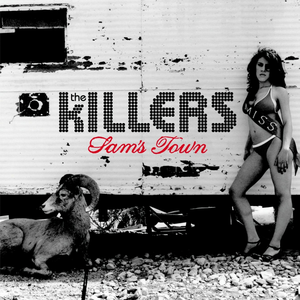 If the Killers’ debut album Hot Fuss conjured images of the glitz and glamour of the Strip of their native Las Vegas, Sam’s Town is about the Vegas that no one sees; the people who are down on their luck, the long open roads and the old, half empty casinos. Despite being released only two years apart, these two albums couldn’t be more sonically different, trading in the new wave flash of Duran Duran for the Americana storytelling of Bruce Springsteen. This makes Sam’s Town a more difficult and less immediately consumable listen – especially for those who were expecting Hot Fuss part two – which explains why it received so much backlash when it was first released (although that sentiment has changed dramatically over the years).

What impresses me most about Sam’s Town is how dark it is lyrically and how off-kilter it is musically, all while still retaining a consistent and entertaining atmosphere. There aren’t any radio friendly songs here outside of “When You Were Young” and “Read My Mind,” but there are many “soaring heights” moments where lead singer Brandon Flowers really commits himself, which makes the album a worthwhile listen on its own. The big question amongst Killers’ fans is: which album is better, Hot Fuss or Sam’s Town? I can’t choose – and frankly, I don’t think the Killers could either, since every album since Sam’s Town has tried to incorporate both worlds, with consistently mixed results.

Viral Tracks: Why Do I Keep Counting?, Bling (Confession of a King), When You Were Young

Sometimes you don’t want to listen to an artist or an album for a very silly reason. Can you blame me for this one though? Between the symbol laden track names, and the erotic fan fiction, I never really found myself wanting to give Bon Iver a fair chance. But, I’m glad that I finally listened to 22, A Million, because it adds so much depth to the “sad crooning man plays acoustic guitar” sound that I always pegged Bon Iver for. The album itself feels so personal, and yet so foreign, with the electronic flourishes and distortion giving the who album a truly haunting feeling. Also I don’t care what you tell me, I still think those track titles are pretentious.